I finally finished a job that should have been accomplished a month ago – the seeding of a small plot of hay just below the house.

Production on this field had been falling over the last few years as the alfalfa died out, leaving only poorly-producing grasses.  This is a normal occurrence, and is the reason that hayfields must be plowed up and re-seeded every 7-10 years.

I had tried a new technique: rather than use a mold-board plow to turn strips of sod upside-down, I had sprayed out the grasses and burned them off, then pulled through with a chisel plow followed by a duck-foot plow to break up the roots and soil.  It seemed to have worked well, and I followed up by pulling the leveler across the field before reseeding.

I tried a new technique there also.  Instead of waiting until spring, I had drilled in the hayseed along with winter wheat last fall, with the intent of having that new crop already up and growing this spring during the time when it normally too wet to farm.

Didn’t work.  The field was overcome by weeds, and the fall planting of alfalfa emerged only sparsely under the dense canopy.  I plowed it all under and started afresh.

It’s a small field, and only takes a couple of hours to cover, but it took a number of trips over the field, and almost-daily rain showers continually delayed the process.

The first pass was with the duckfoot.  But it left streaks of green weeds in the field requiring another pass cross-wise, and then another at a different angle again.  Then a pass with the disc to smooth out all the clods.  Finally I hit it with the leveler – again with three passes:  first north-south, then east-west, and finally at a 45o angle across that.

It seemed as if every pass was followed by a rain shower.  Most of these showers contained enough moisture only to delay the farming process for another day or two, while not really adding anything significant to the soil moisture profile.

Then the drilling.  That should have taken only another couple of hours, but I ran short of seed and had to make a trip to town for another bag of alfalfa.  And then it rained before I finished. 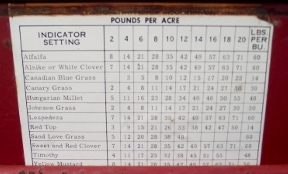 But we’ve done all the farming we can do for awhile, and now we’re on to other tasks.
Posted by Neckrein at 7:11 AM No comments:

It’s raining.  Not a real rain, but a steady patter – there was a half inch in the gauge this morning.

It takes a full four inches of rain to soak the soil to the depth of the roots, so these showers are akin to making the minimum payment on your credit card rather than paying off the balance – but we’ll take it!

Because the soil is not being soaked by Mother Nature we have been making up the deficit by irrigating our best hayfields.  Our first task every morning and last task every evening is to reset the water in the two fields.

One of the fields is irrigated by siphon tubes.  We have ten of these 3” PVC tubes that we pull out and reset on down the ditch.

To restart them we put them in the ditch to fill, then use a small ball to seal off the end as we pull them up and over the ditch-bank.

The other field has gated pipe.  We simply slide the gates open on another run of pipe, then close the gates that have been running for the last 12 hours. 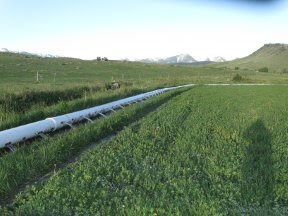 I began the week by turning the bulls into the cows.  That subject is covered in my post from last year at this time - http://mellinniumcowboy.blogspot.com/2011/06/turn-em-in.html .  That project, of course, required the use of a horse.
The bulls were in with a handful of dry cows, which had to be cut out.  I also had to cut out the one yearling bull that would be put in with the yearling heifers.  Then the two groups – bulls to the cows, one bull and the dry cows to the field with the heifers – had to be moved from ahorseback.

We had fencing to do:  Much of the fence up in our summer range was constructed some 80 years ago.  The wire is old and brittle, the original posts are all long rotted away, and now the replacement posts are falling over.

We had farming to do:  It finally dried out enough to disc and level another field, and to run the packer over the field where a new crop of oats has now emerged.

And more spraying:  I got off another 100-gallon load with the tractor, which jets a pattern 60’ wide and is excellent for getting the weeds along the rocky ridges.  I also spot-sprayed a couple of back-pack loads.

I didn't finish seeding that last field - and it will be a few more days now.  But I have plenty of desk-work to do, writing and paying the first-of-the-month bills.

Wait a minute.  It’s stopped raining.  The sun is shining!  Were back to plan A:  saddle up right after lunch to gather all the cows out of the desert and push them over the hill into the Schweiger.
Posted by Neckrein at 9:47 AM No comments: