A familiar sight on Montana’s highways in the fall is the “Pot” – a possum-bellied double deck semi-trailer hauling cattle.  Also known as a “bull-rig”, there are thousands of them scattered around each of the Western States – and all of them are busy in the fall. 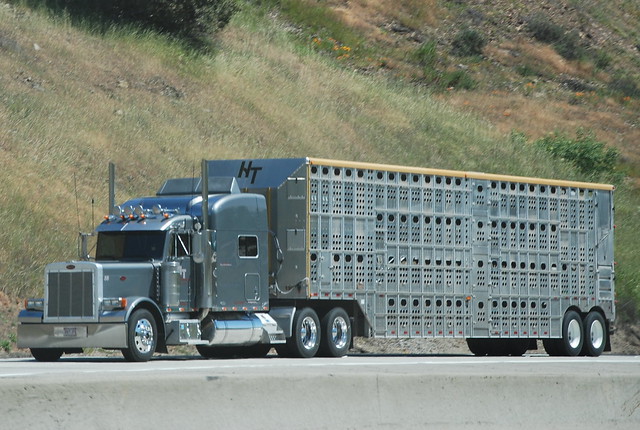 Most ranches in the inter-mountain West are termed cow/calf operations:  a herd of cows is maintained year-around; they calve in what is loosely called “spring”; the calves run all summer gaining weight on grass; and the calves are sold in the fall to the big feedlots in the Midwest, where they are fattened to supply the meat section of your grocery store.


A calf with a birthweight of 70 pounds spends all summer with his mother – both of them eating grass.  The calf nurses at his pleasure, and gains as much as 3 pounds per day on this rich, natural & organic, environmentally correct, and sustainable diet.  By fall he weighs over 600 pounds, and is ready to leave the nest and move on to the next phase of his life – a feedlot where he fattens on a ration of hay, straw, silage, and some grain.  This calf gained some 600 pounds in the first 6 months of his life, and will gain another 600 pounds in the feedlot – mostly on materials that are not digestible by humans.


Everyone is familiar with the “cattle drive” as depicted in such TV series as “Rawhide” and “Lonesome Dove”.  In fact, trailing cattle was once the only way to move them to summer range or to a shipping point.  But just as ATVs are rapidly replacing horses in gathering the cattle, semis and gooseneck stock trailers have mostly replaced the trailing of cattle.


In the fall, these bull-rigs can be seen everywhere.  Cows are hauled home from summer range, and calves are hauled to market.  Trailers of all sizes haul calves in from the ranch to a sorting-yard where they are weighed and sold, and another set of semis is waiting to haul them to the feedlots of the Midwest.  The regional livestock auctions are swarming with trucks of all descriptions as cattle come in from the ranch, and move on into the food chain.


And thus another year in the cycle of ranching is completed.
Posted by Neckrein at 7:38 PM No comments:


The truck was set to arrive at 9:00 on Monday – but we were still a few head short. Eric had spotted a missing bull and a wayward yearling heifer in the far north pasture while he was salting the cows earlier in the week. We left early on Saturday to bring them down.


It was a couple of miles up and over the top and across the next field to reach these two head.  We usually rode our horses up, as it was faster, smoother, and easier than driving.  And we had just trailed down from there with the main bunch of yearlings.


But this bull had already evaded us in the last two gathers, hiding in the brush at our approach.  He would be hard to control without the draw of other cattle.  And the yearling that was with him would keep one man busy holding her together with a slow-moving bull.  It would be far easier to trailer them.


And there were the two cow/calf pairs that had come over the rim and down into the hayfield.  We wanted them back up with herd over on Sick’Em Creek.


It didn’t take long to bring in those two pairs to the bottom corrals and throw them in the trailer.  Eric jumped his horse in behind them.


We would need to ride through the cows in the Sick’Em Creek field  to look for any yearlings we had missed.  It was a big field – some 650 acres cleft into three parts by the two steep forks of the creek.  Eric would drop those two pairs on top and begin riding there, while I headed out from the lower corral, through the hayfield, across “The Desert” pasture, and rode up from the bottom of Sick’Em Creek.


That was a lot of ground for two of us to cover, and neither of us could know where we might find what cattle.  We each took a radio. 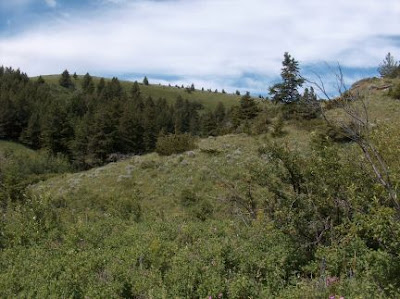 It was nearly a half-hour jog for me to get to the bottom of Sick’Em Creek – and even longer for Eric to drive to the head of the creek.  I worked through the steep and heavy timber, and picked my way up the creek – switching back to ride through all the cows in that part of the field.

I was almost up to the stock tank when the radio crackled.


“How about you Boss?  I’ve got the bull and the heifer over by the middle gate into Mendenhall.”


By the time I dropped down, crossed the creek, and climbed up the gulch into the big meadow at the center of the field I could see Eric circling around the heifer on the other side of the gate.  I arrived just in time to close the gate behind him, the bull, and the heifer.  It took both of us to trail the two head the last 3/4 mile back up to the corral, where we loaded them into the trailer, closed the divider gate, and jumped our horses in behind.


The morning was still cool when we dropped our horses at the barn, on our way to throwing the bull in the corral, and dumping the yearling out in the field next to the shipping corral.


In just over 3 ½ hours we had picked up two pairs, dropped them back with the main herd, ridden through some 300 head a couple of miles from headquarters, and returned with a bull and a yearling.


We were satisfied with our morning’s work.
Posted by Neckrein at 8:40 PM No comments: