It’s that time of year again.


My horse needed to have his shoes reset, and it’s that time of year to include rim pads under those built-up shoes.


We range on the West Boulder River in the Absaroka foothills, where rocks are everywhere.  I seldom shoe my horses at any time without having first built up the toes and heels of their shoes with hard-surface welding rod for two reasons: extra traction, and extra wear.  After six weeks of wear, I usually run another hard surface bead on the shoes to replace the layer that has worn off.


In addition to the layer of hard-surface on the bottom of the shoes, this time of year I place a set of rim pads under the shoes. 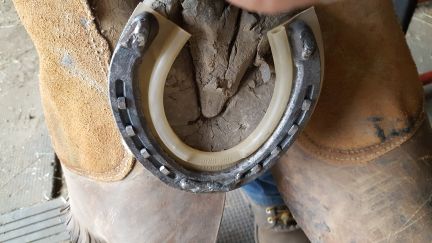 These rim pads are designed to keep the snow from balling up on the bottom of the feet.  Even a barefoot horse gets snowballs when conditions are right, and horseshoes form a rim that holds those snowballs onto the foot.


That snowball makes walking awkward, and also elevates the shoe away from the ground so the cleats can’t dig in.


We’ve already had some snow, and there’ll be plenty more over the next 9 months.  I want to have as much traction as possible when my horses scramble after a critter.

My good old horse is slowing down.

That was especially apparent yesterday when we went to the far north corners of the ranch. He walked the whole way out to the job.

In years past, the default gait of my “Kentucky Colt” was a long trot. He would hold that pace without any urging, until such time as there was a reason to speed up: to turn a cow – or to slow down: to cross a stream or a log, or to follow a critter. Even at a walk he had to be reined to the left or right as we zig-zagged behind the herd.

But today he walked.

It's a tough pull up out from the barn and up Mike's Coulee to the top of the mountain – gaining 1000' in elevation in only a mile – and we weren't in any hurry. But when “The Colt” was younger he once made that entire 8-mile circle without ever changing speed.
And he didn't change his pace today - just that steady walk - until I needed speed, that is.
We were at the far north fence when we began our gather. Rather than head straight south, however, the cows for some reason turned down Bull Coulee toward Mendenhall Creek. I had only to lean forward a bit in the saddle, and the Colt was off – over, around, and through the rocks and knee-high sage to turn them.

Once the run was turned, the Colt was willing to stand quietly as we waited for my granddaughter, Taylor, to show up over the ridge at the tail-end of the bunch, before we turned back to continue on to the next corner of the field.

We found another seven head, and turned them to follow Taylor's bunch – which was by now a good half-mile away.

It is four miles from the barn, up and over the top, back down the other side, and across the head of Bull coulee to the north fence. Even after we turned them, the cows dropped down toward the brush in Bull Coulee, and had to trail back up across the flats above. We followed this little group back up the hill until we could hear the bunch ahead of us. Then we turned off and headed back down off the bench and into the Mendenhall Creek bottom, to follow the creek up to the stock tank where Taylor's bunch would collect.

For a dozen years, riding the Kentucky Colt had been like sitting astride a Harley Davidson: you were straddling pure, raw, power. He had needed no urging to dig in with those powerful hindquarters and bust up, down, over, around, and through whatever country unfolded in front of him – one just released the clutch!

He had been ten years old before he could slow down enough to sort cows in a corral without getting frustrated and angry.

But after we dropped our little gather of cows with Taylor's bunch, the Colt had fallen back down to a walk again. And I had no interest in jogging. I was slowing up too. Perhaps the Colt wasn't getting physically old and tired. Perhaps he was finally getting sense.

The question was settled as soon as we dropped our gather through the gate and turned toward home. After some six or seven miles of up and down, through the brush and across the creeks, the Colt broke into a trot. And then a lope. Before long we were at a flat out run as Taylor's horse raced up behind us.

Even at 17 years old, the Kentucky Colt has plenty of life to accomplish whatever job is at hand. Maybe he's just maturing, and learning to conserve that energy for when he really needs it. I know I am.
Posted by Neckrein at 5:32 PM No comments: