All manner of mechanical toys are commonly seen in America these days: skis, surfboards, trail bikes, dirt bikes, boats, snowmobiles,  ATVs…  Town folks work all week to have the time and money to escape the city and enjoy the great outdoors from the vantage-point of these expensive devices.


What are toys to the city-folk, however, have become tools for the rancher.  Far more cattle are now handled by four-wheelers than by horses. And the side-by-side ATV is just the tool to check on cattle, ride out to change irrigation sets, haul salt to the cattle, and fix fence.  A side-by-side is far more convenient than a pickup, uses far less gas, and is far easier on the land.  In addition to trucks, tractors, pickups, farm implements, and haying equipment, we now consider both a four-wheeler and a side-by-side to be essential to ranch operations.


And now we have a tracked side-by-side. 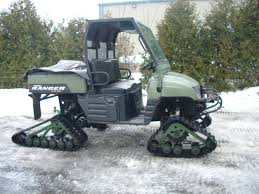 This morning we have 18 below zero and some 2 feet of snow.  It’s just too much for a pickup – even with chains on all four tires – so we’re feeding with a big four-wheel-drive tractor and a hay wagon.


But we are just beginning to have new calves, and we needed to get out to check on the calves.


The horses were all out to pasture, and we usually use the four-wheeler to run them in when we need them.  The snow is far too deep for the quad. This new Ranger was just the tool to bring in horses.


To get ahorseback, however, I would have to follow the tracks through knee-deep snow to the horsebarn, saddle a horse, and ride a half mile out to the cows.


Eric has his new tool sitting just off his front porch.  He fired it up, swung by to pick me up, and we were through the cattle and back in the kitchen drinking coffee in less time than it would have taken just to saddle up.


I’m a bit ashamed.  In the old days we’d have harnessed the team and hitched them to a bob-sled, maybe leading a saddle-horse behind.  It would have taken several loads.  We’d have spent most of the day breaking trail with the horses.


Now we can spend a couple of hours inside the cab of the tractor – stepping out only to flake the hay off the wagon.  Then we can drop off the loader and mount the snowblower, to clear away the snow from the trails and the gates rather than just trampling it down.

No longer the clop of the hooves and the jingle of trace-chains in the dead-quiet of a snow-filled world.  Now the growl of a tractor and the whine of an ATV engine break the silence.


And this is progress?!?
Posted by Neckrein at 8:56 AM No comments:

Normally, one speaks of a bad winter as a hyphenated number – as in “the winter of ‘78-‘79 when I was on a ranch west of Choteau.  The snow and cold began in November of 1978, and continued through February of 1979.  (You can read more about this winter in my book Ain't This Romantic!?!.)  But this winter didn’t start until February.


Montana weather is notoriously fickle – a “typical” winter in Montana has temps on any given day ranging from 40 below to 40 above. In fact, on January 15, 1972 in the town of Loma, in central Montana, the temperature rose from 54o below to 49°F above – in one day! 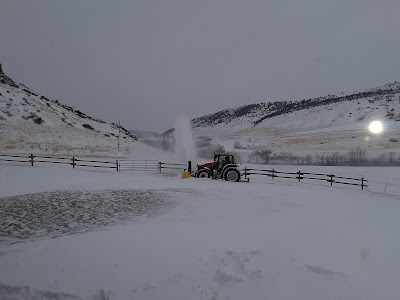 Some years we have snow and below zero as early as November, and I have seen below-zero weather and serious blizzard in April.  (More of these stories in the book Ain’tThis Romantic!?!


This winter didn’t begin until February.  The cows had been out grazing until then, and we didn’t begin feeding hay until late January, when they had grazed off all the available grass.


We all enjoy an open winter, but I’m always aware of the fact that we will pay for it later.  If we don’t pay for it by having bad weather in “the spring”, then we’ll pay for it with poor pasture and fires in the summer.


February of this year has been brutal. It’s the 2nd coldest February on record for Montana, and we have knee-deep snow.  And this is the time when many ranchers are calving.


A new calf can stand ten below just fine – if he is dried off and has a full belly.  But being pushed soaking wet out of the womb and into a snowbank is a recipe for hypothermia.  And that hypothermia slows the brain processes enough to delay standing and sucking.  Many calves born outside in that weather don’t make it.


Those ranchers who do calve in January and February all have sheds into which they can take new calves – or cows who are about to calve.  They check their cows regularly all day, and several times at night. We have such a shed, but we choose to wait until mid-March to begin calving – when the days are longer and the nights not quite so cold.


We took on another 45 cows in January, however, that are bred to begin calving now.


We always throw up an electric fence to contain the “heavy” cows in a field that is entirely visible from the house.  But the ground is frozen.  We’ll have to drill into the dirt to drive in posts for our temporary fence.  And the deep snow makes it difficult to trail in the cows that are near to calving.


“They” say that if March comes in like a lion it will go out like a lamb.  But March 1st was a pleasant interlude of 20o above and sunny.  I hope that lamb-like 20 above doesn’t portend a March going out like a lion.


It was 10 below on the morning of March 2nd, with a forecast for an overnight low of -18o.
Posted by Neckrein at 8:01 AM No comments: