As I wrote in my post Horse Poor – 99% of the time a man has too many horses, and 1% he doesn’t have enough.  In that same post I wrote about a new horse in the string – the “Copper” buckskin.


And I have written about the advice many years ago from Harry Yeager:  “You can’t camp on one horse; You never know when you’ll need another horse; You always need to keep another horse hard”.


That post was written five years ago.  The Copper is now a solid, broke, cowhorse that nearly anyone can ride and get the job done.  My top horse, Thunder – AKA “The Kentucky Colt” – is now 17 years old.  And I have a new horse on deck: Blaze – AKA “The Medicare Colt” – because I intend to be riding him in my Medicare days.

Very few people appreciate the “handle” of which a finely-tuned cowhorse is capable: the ability to negotiate any sort of terrain, the ability to blast out after a bunch-quitter and then shut down to turn her, to rope a calf and hold him, to stretch out a cow to be doctored, to sort cattle in the pasture or in the corral, to open and shut corral gates or wire gates, to heel calves to the fire….


Even at seventeen, Thunder is still my “go-to” horse when the going is tough.  If I go out after it, the “Kentucky Colt” will bring it home – one way or another.  I ride the Copper to tune him up in between the various riders who need a quality horse when they visit the ranch - but my focus now is getting the Blaze trained up to take over.


I am now riding the Blaze whenever the job allows a not-so-broke horse - and Thunder when I have a tough job and need the handle of a well-broke horse.  With each succeeding ride, the Blaze becomes more responsive – he moves out nicely through the sage, turns easily to handle cattle in the pasture, and I was opening gates on him yesterday.  By fall I hope to use him to do some corral sorting.


This “on deck” horse is a beautiful horse, and a willing horse, and he has lots of personality and lots of potential – but he is still green.  He doesn’t yet understand the job, and he must be continually guided.


Perhaps in another year he will have sufficient experience to work cows like the Kentucky Colt - with no conscious effort on the part of the rider, whirling and spinning to the music of the West, each of us enjoying the cowboy dance.


I was in my good clothes and headed for town when I saw a plume of smoke just up the West Boulder from the ranch.  Rather than continue on down Swingley Road, I turned left on the West Boulder Road and then under the arch of a neighbor’s entry lane.  The fire was obvious as I approached the shop.


Half a dozen people were scurrying across the yard, filling buckets of water and loading them into a pickup.  I asked for a phone.


My first call was back to the ranch, three miles downstream – Eric had already seen the smoke and was heading for the truck we had set up - only two days earlier - with a water tank, pump, and hose.


My next call was to the neighbor 5 miles to the west, who likewise had a fire truck.  Then a call to the neighbor 7 miles east, who was the captain of the local fire department.  Finally a call to 911 to send a crew from Livingston, 45 minutes away.  The fire was still only an acre or two, but it is always better to have more resources on the way.


The fire had started with a simple spark from a tractor loader-bucket against a rock in the field - but it was instantly beyond control.  The operator of the tractor quickly alerted his wife, who made the first phone call.  Neighbors Dick and Cathy saw the smoke, and arrived soon after.  I was the next one on the scene.  Eric pulled in with our truck, and I climbed in with him.


There was a gravel road between the fire and the nearest buildings, with several people working on that side, so Eric and I headed for the west flank.


After firing up the pump, Eric took the small hose and sprayed the edge of the fire as I drove the truck alongside.  We were able to snuff out the line of burning grass until we were turned back by a steep rocky ridge.


Circling back, we spotted a stock tank, and pulled in to replenish our supply.  Close behind us for a refill was Lonn with his truck and 3-man crew.


The fire was headed north, so Eric took the truck in search of a route in that direction, while I grabbed a hand-tool off our truck to beat out the flames across the top of that rocky ridge.


I hadn’t gotten far before I was met by a Rural Fire truck, and I spotted another truck close behind.  In fact, there now seemed to be men and fire trucks  in every direction!


With this fire now contained, I was able to lean on the handle of my fire-tool and contemplate the situation.  Most of the time, from where I was standing, one could look for miles in every direction and see no sign of human activity.  Yet today – within one hour of the first smoke – there were men and equipment all around!


A few acres of grass had been burned, and some fence had been scorched, but all of the nearby buildings and haystacks had been spared by the quick response of neighbors and fire crews. 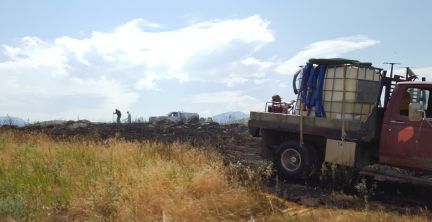 My role in the fire was now finished, and I had a doin’s to attend in town, so I returned to my rig and headed out.  As I drove I again noticed the temperature of 90+ degrees.


For several days now, Eric and I had been choosing and timing our tasks to avoid, as much as possible, the midday heat and direct sunshine.  Yet as I drove down the road in my air-conditioned rig, I realized that I had been working in that direct sunshine, in the heat of the day, in the face of the searing flames – and had never noticed the temperature!

Posted by Neckrein at 7:15 PM No comments: