A motorist on Interstate 90 saw smoke high on the ridge south of the Yellowstone River.  He pulled in to the next ranch.
Jim, at Felton Angus, didn’t have a good view of the ridge above him, so he called his brother-in-law across the river at the Lone Star Ranch.  Scott saw the smoke, called his brother on Mission Creek, and 911.
I had just returned to the ranch on the opposite side of that same ridge, and was still in my town clothes, sitting on Eric’s deck, and catching up on what he had accomplished while I had been gone.  Jenn said “What’s that?” pointing to a huge plume of smoke coming over the ridge.
Eric and I ran to the Quonset for radios; Eric jumped in the Rhino and sped out into the field where our “fire truck” was parked.  From there he had a clear view of our “Pine Ridge”, and flames coming over the top from the other side.
I raced to the house to throw off my town clothes and make some phone calls – the first call being 911.  It had been a moist spring that had grown some lush grass, followed by a dry summer; we were ripe for fire, and needed all available resources to stop this one as quickly as possible.
We had an older 1-ton flatbed truck that we used for feeding the ”mid-sized” 3’x3’x8’ bales that we bought to supplement our home-grown supply of small square bales.  Come summer, we set that truck up with a 300-gallon tank, pump, and hoses.
Eric stopped at the house just long enough to tell me what he could see, then headed past the barn to come in at the fire from its west flank.
The road to the top of the ranch is long, steep, and rough.  In fact one can reach the backside of the ranch faster ahorseback then he can on wheels.  It would take Eric 45 minutes to get to the fire in that stiff-riding truck.
My next call was to the McLeod fire captain – no one answered so I left a message.  Then a call to my next door neighbor, Brian.
Marianne answered and said Brian was already on his way up in a McLeod fire truck with Bill Brownlee, a rancher on the Main Boulder.  They were going by way of another road to the top, directly below the fire.  This road was even steeper - but shorter, smoother, and straighter.  I was reassured to have Brian on the radio in the middle of this fire, as he had ridden our ranch, and knew the country.
I was still in the house when Stuart – McLeod Fire captain – called.  He was speeding back from Bozeman.  Stuart asked me to stay down on Swingley road and direct responders from there.
Now appropriately attired with hat, gloves, and heavy lace workboots, I grabbed the radio and binoculars, and took the four-wheeler out to the end of our lane on Swingley Road.  From there I could see the flames coming over the top and down in the West Boulder Valley.
Soon, Jenn showed up in the pickup.  Eric had left the Rhino sitting out in the field where the fire truck had been parked.  Did I want her to go get it?  Yes!
Cody, from the Burnt Leather Ranch a few miles up the West Boulder, had not answered his phone when I called.  But he was the first to show up.  We had a brief discussion about the location of our cattle, and he offered to run back home for a horse.  Yes, the cattle were in the very field where flames were now evident, but the wind seemed to be pushing the fire away from, rather than into, the field.
“No”.  “Jenn, take Cody in the Rhino and drive up to Eric.  Throw all the gates open as you go.”

Next came two units from Park Rural Fire.  This fire was in Sweet Grass County, but right on the line with Park County – and nobody cares about county lines in a fire!
The fire was still a mile away from the river, but coming fast.  The house at the bottom of the ridge – a place named “Twisted Stick” – was the first structure in danger.  I sent them on down the road and gave them directions to the bridge.  Brian & Bill and Eric & Cody seemed to have that west flank contained on our land. 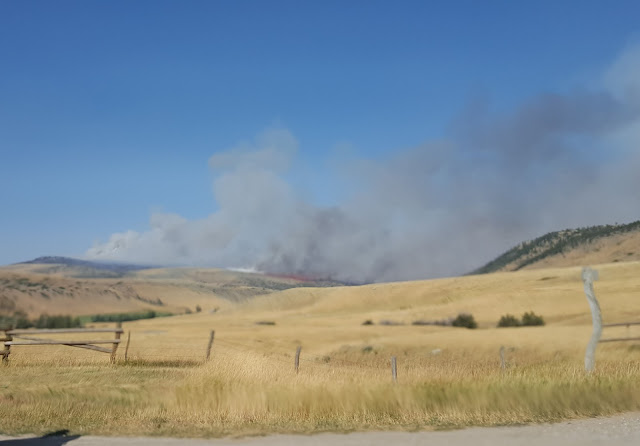 More crews came in from the Park Rural Fire station in Livingston, and I sent them on down Swingley as well.  The first trucks would have flagged the bridge.  I knew there were three more trucks at the McLeod fire hall, and more coming from Sweet Grass Rural Fire in Big Timber.
But I couldn’t see what was happening over the ridge.  Eric was visible working the west flank of the fire, but he radioed down that he was almost out of water.  He would have to get back to the Harwoods stockwater tank at the head of Mendenhall Creek to refill.
We carried suction hose on the truck.  He could back up to the tank, change a couple of connections, and pull up water out of the stock tank and into the tank on the truck.  The time-consuming part was getting there.
We mostly cover that country ahorseback, and don’t often need a vehicle.  But the track has several places that cross steep side-hills.  I had often thought about pushing through a level road, but it would take a bulldozer.  Would the benefit be worth the cost?  No one else in the 125-year history of the ranch had thought so.
But then Grandpa Elges, who had homesteaded the place, had run sheep.  And he had occasionally burned off some of that country.  Controlled burns are themselves expensive nowadays, and fraught with liability concerns.  I’d not yet had the resources - nor the fortitude - to attempt a burn up ‘on the mountain’.
Taking salt across those sidehills was not much of a distress.  We’d even hauled in a dump-truck of gravel to armor around that stock-water tank.  But water slopping around in that truck-tank, mounted high on the flatbed, would make even Eric pucker up.
My worries about the north flank of that fire were allayed a bit when a spotter plane arrived.  He could see the entire perimeter, and could direct resources as needed, by radio.  I assume he was dispatched by the Montana Department of Natural Resources.
In fact, several of the trucks on scene were DNRC.  Many of the small local volunteer units in Montana – including McLeod - have trucks issued by DNRC.
There are many types of fire engines: pumpers, ladder trucks, airport crash trucks…  They are classified by water capacity, pump output, equipment carried, and capacity for such things as foam or wetting agents. Ours would be considered a Wildlands truck – maybe a Type I.  I assume that air resources such as retardant tankers and helicopters have their Type ratings also.  Fire crews, Incident Command, and dispatchers know that stuff - I’m none of the above.
I could see the fire descending toward the Twisted Stick.  It hit steep pockets of heavy timber, and exploded.  But we had no wind, and it was headed downhill – distinct advantages to firefighters.  I didn’t know how Trisler was doing down there, but I did know that there were plenty of resources to do everything possible.
Then the tankers arrived!  I couldn’t see much through the smoke, but there must have been a couple of twin-engine retardant planes and a couple that were dropping just water.  I don’t know where they picked up their loads.
I’d only seen the resources coming in from Livingston on Swingley Road, and the air tankers.  I assumed there were just as many coming in the other direction from Sweet Grass County.  What I didn’t see were the resources coming up Mendenhall Creek on the opposite side of the ridge.
There were two or three helicopters dipping out of our “Pothole Lake” on top of the ridge.  There were two or three bulldozers and a couple of road-graders plowing fire lines.  But I realized how seriously the fire control officers were taking this incident when a huge DC-10 thundered over the house.
This plane had apparently come from Billings, 100 miles away. 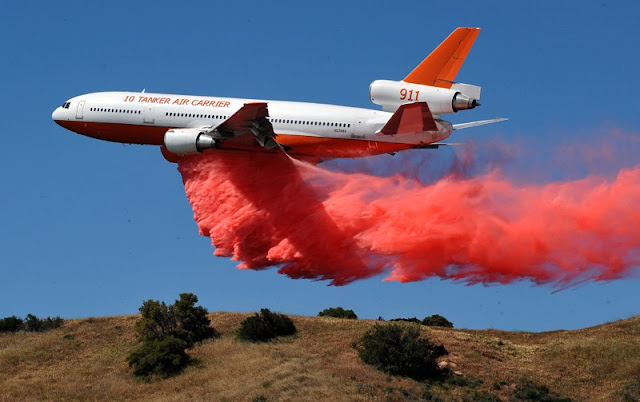 We had first seen smoke at 1:00.  With the help of neighbors, Rural Fire volunteers, and then air support, the perimeter was controlled by 5:00.  What could have been one more disastrous fire was quickly contained.

For most of the year one can look out across the West Boulder Valley and see no human movement at all.  But when fire threatens, there are suddenly men and equipment everywhere you look.  You are grateful – and you wonder where they all came from, so quickly.

Posted by Neckrein at 6:35 PM No comments: