We worked cows yesterday – another major event for the year.

It began on Tuesday afternoon with gathering them all to the weaning lot for an overnight stand without feed.  In the morning we corralled them and began running them up the chute to the squeeze, where we pregnancy-tested, vaccinated, poured, bled, and tagged them.

Pregnancy testing is done by rectal palpation.  Although I have done that myself in the past, this year we used the veterinarian.  He donned a long plastic sleeve to accomplish the task of inserting his arm in the rectum and feeling the uterus through the rectal wall. ( For those of you who are interested, there is a YouTube of that too:
www.youtube.com/watch?v=yR-mmhRytVw

His next action was to bleed each animal.  Because there is a disease called brucellosis that is common among the elk and bison in Yellowstone Park, we must bleed our entire herd every third year and send the sample off to a lab to check for the disease in our cattle.  That entails taking a 2cc sample from each animal – drawn from a vein in the underside of the tail.

Each of those blood samples is keyed into a handheld computer, along with the herd tag number, a small metal tag, and an Electronic Identification Device button, which are all affixed to the ears.

Along with that are the administration of an anti-parasitic – poured along the pack – and a vaccination for Leptospirosis Pomona  - another reproductive disease.


This contraption is called a squeeze. The front closes on the neck; there is a tailgate behind; and the sides close in to immobilize the animal while we perform all the various operations.


Note that my side is a bit dirty.  I had been helping load the chute, and was kicked by one cow and knocked down in the “mud” by another.


Most of the work of pushing cows up into the chute is done ahorseback by my son Ted.  But the cows were more resistant than usual on this day, and I went in afoot to help him a couple of times. 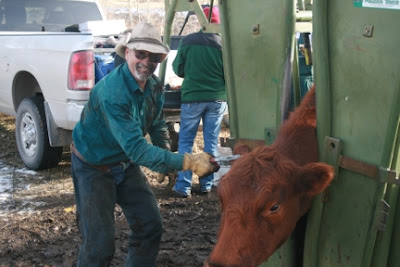 Here I am applying the EID button.

Today we were ahorseback all morning sorting all the cattle in different directions:  First we sorted off the cows that had not conceived – the “drys” – and put them in the corral.  Next we sorted off the yearling heifers, to throw in a hayfield with the heifer calves that we had kept for replacements.  Then we cut out a group of 11 and 12 year-old cows that were getting too old to keep on a mountain ranch.  These will be sold at auction next week as “short term” cows, to someone who has better feed and flatter country on which to run them next summer.  The balance of the cows are the main herd, which went back out to pasture.

And thus finishes up the cow work for this year.
Posted by Neckrein at 7:38 PM 2 comments:

Tuesday was shipping day – the big paycheck for the year.


Ours is a cow/calf operation:  We run a herd of cows year-round, feed the dry cows through the winter, calve in the spring, and sell the calves in the fall.  From here they go to a feedlot in Iowa to be fattened for slaughter.


The shipping process began several weeks ago when we gathered the cattle from summer range into the corrals at the top of the mountain to pre-vaccinate the calves for a collection of respiratory diseases lumped into the nebulous phrase "shipping fever".  The next step, three weeks later, was to again gather the herd from the summer range on top of the mountain and trail them down into the fields along the river.  On Monday we ran the herd into smaller lot from where we cut out the replacement heifer pairs.


These cattle we cut out on Monday were the better half of the heifer calves, along with their mothers.  These heifers will be kept over and grown out to replace older cows as they leave the herd.  Since they won’t be shipped off the ranch, we cut them out of the herd early, and move them to a different field so we don’t have to deal with them on shipping day.


I ordered a truck for 10:00.  Ted and I – and of course the dogs - headed out ahorseback at 8:00 to gather the main herd from the 360-acre pasture and into the corrals.  The next task was to sort off the cows, leaving only the calves. 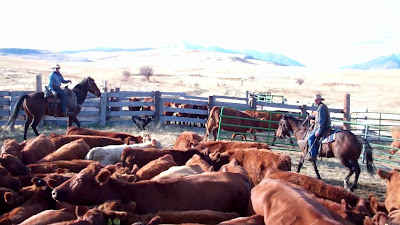 As useful as my dog is in gathering the cows, he is even more useful in the corral.  He stays close behind my horse as I sort off a group of cows, then comes out to take my cut on down the alley and out the gate - giving the cows some real incentive to keep moving, and saving my horse and I a lot of steps.  When the truck arrives, Max works the outside of the chute, reaching through the slats to grab at the ribs of any calf that hesitates to go into the trailer. 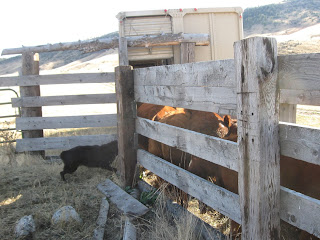 The first truck takes the calves into the shipping corrals in Big Timber.  There they are sorted and weighed, inspected for brands and health, then loaded into long-haul trucks for the trip to Iowa. 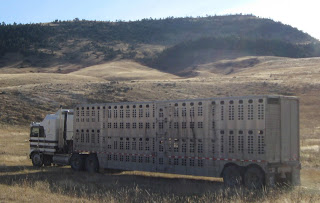 The shipping corrals  in town are a beehive of activity during the fall.  At any given time there may be a dozen each of semis with their pot-bellied stock trailers, pickups with their goose-neck stock trailers, and various other vehicles transporting buyers, brand inspectors, veterinarians, and ranchers.  There may be 1000 calves being unloaded, sorted through the various pens and alleys, inspected, and reloaded for the trip to their new homes.  Hundreds of thousands of dollars changes hands on any given day.


The price for calves is up from last year’s $1.35 per pound to $1.46  per pound.  And weights are up this year by 25# per head from last year.  It was the driest summer for years, but while grass quantity was poor, quality was much better than last year.
And wolf activity was not apparent in the cows this fall as there was last fall.  (We did lose a cow to bears, however.)

With shipping and weaning just behind us there is music in the air:  25 heifer calves in the corrals are still bawling for their mothers, and a bunch of despondent cows out in the pasture are bawling for the calves that were taken away in the truck. But in a couple more days the silence will return to the West Boulder - except for the occasional gunshot from elk and deer hunters.
Posted by Neckrein at 6:52 PM 1 comment: