I had traded for a green six-year-old mare, and I led her from the horse trailer directly into the corral for her first lesson.
The mare had been handled enough to be gentle, but the first challenge was in picking up her feet.  She resisted, and pulled away several times before I went into the barn for a hobble.  When I finally got the foot up I quickly buckled the strap on her fetlock and around her upper leg – when she pulled away it did her no good, as the strap kept her from setting her foot down. 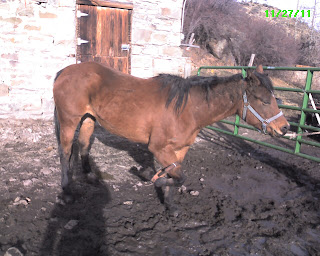 She fought the strap for awhile before giving up.  Then I took it off and moved to the other side where I repeated the procedure.  When she understood that I meant to keep her feet when I picked them up, I moved to the hind feet.  The lesson had taken – she didn’t challenge me anymore.
Then I moved on to the next step: tying her head to her leg.  Picking up a front leg, I quickly took a wrap with the lead rope and tied it off.  When I set the foot down it pulled her head down.  When she jerked her head up it lifted her leg!  It took a few tries at that before she understood that if she gave her head to the pull she could stand with no pressure on her head or her leg. 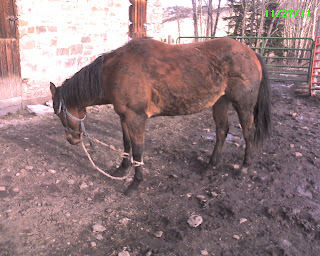 A horse can only absorb a couple of lessons with each session so I turned her loose after some twenty minutes of work.  It will take a few days to gain confidence that I will not hurt her.
I repeated those two lessons the next day, and by the third day it was time to throw on a saddle.  I soon as I pulled up the cinch she exploded, laying back on the lead rope until she fell over on her side in the mud.
I gave her a little sympathy, patting her all over and putting my weight on her up-turned side.  But she wasn’t learning anything by lying there, so I gave her a slap to get her back on her feet.
Again she reared back, and again she fell on her side.  Five more times I got her up, and five more times she quickly tipped over into the mud.  And now I understood why the fellow had been so eager to trade her off.  His trainer had told him about the show she had put on when he first saddled her, and apparently it was enough to scare them both.
One more time I got her up, and this time she just stood there quietly.  She’d been running free for six years, and wasn’t interested in being bound by leather straps and cinchas.  But she’ll soon learn that ranchwork is fun, and she’ll be the first one in the bunch to put her head in a halter, eager to get to work.
Posted by Neckrein at 6:43 PM