The big winter storm scheduled for the end of last week sort of petered out. We had only about 4” of fresh dry snow before the sun came out again.
That was enough for me to start feeding the heifers.  I judged that their nutritive requirements for growing both a fetus and their own frame were teetering on the brink, and a deficiency now can result in poor breed-back next spring.  The cows are on fresh pasture now, and they should be fine on grass and lick as long as it doesn’t get too cold.
The temperature dropped to zero on Monday for the first time this year.  We’d already endured a couple of weeks of well below zero by this time last year, so we’re grateful for the warm weather we’ve had.  I was considering giving hay to the cows, but the sun came out and the temperature rose – and it was above freezing today!
One daily task that is added when the weather turns cold is breaking ice on the water troughs.  These tanks hold 1000 gallons of water, most of it buried into the hillside, with only enough exposed for the cattle to get their heads in.  That thermal sink helps, but ice still forms in the exposed trough when the weather gets colder, and we carry an axe to chop the ice out. 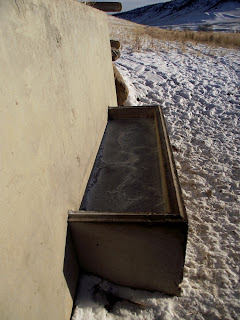 ﻿
At times the ice can get 2-3” thick in this trough, but that’s still a big improvement over the river.

Before we installed this tank the cows drank out of the river.  During extended bouts of subzero weather the ice got thicker while the water level dropped in the river.  At time the cows were on their knees on the ice near the middle of the river trying to get a drink.  There was always the danger of the ice breaking or a cow being pushed in.  There were times when I considered using a backhoe, or even dynamite to break enough ice to get the cattle to water.  I’ve gone so far as to chop a hole in the middle of the river and pump water out into a tank.  But it usually warms up again before long, and the problem subsides.
It’s always fun to see elk on the ranch.  There are big herds a few miles away on both sides of us and they range through on occasion.  Our hunters get a few every year, but the elk don’t generally hang here.

Training on my new horse is going pretty slow.  I don’t know her background, but she is still intent on throwing herself when I tighten the cinch.  In 50 years of horse-training I’ve never seen such a thing.  But I’m in no hurry and we’ll get through it.  She’s pretty well-mannered other than that bad habit, and it won’t be long before I can show her some country.
Posted by Neckrein at 8:54 PM